How to Sell Inherited House

If you have been wondering how to sell an inherited house, you most 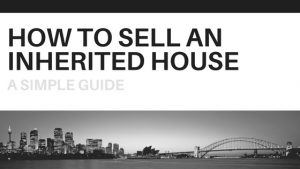 likely also went through the loss of a loved one, a family member. Most of us, myself included, have a hard time working through the emotional part of losing someone, let alone the cumbersome and time-consuming part of selling a house.

I remember buying a house from an incredible woman, whom I shall call Sally. Sally had lost her father many years prior. She lived in nearby Redondo Beach with her husband and the house she grew up in, the house she inherited, was in Torrance, not far away. Unfortunately, her father’s caretakers never left the house once he had passed. Instead, these two men stayed in the house rent-free, insisting that they hadn’t been paid enough while caring for Sally’s father and that the free rental would make up for their lack of payment. By the way, they lived in the house rent-free when the father was still living and was paid well for caring for him.

The inherited house had quite a bit of deferred maintenance and Sally was unable to pay for the repairs. Also during this time, Sally was dealing with cancer. Once the financial struggle, the medical struggles and the non-paying “renters” became too much to handle, Sally called me. We met at the house, got to know each other, I presented an offer that was acceptable to her, and I bought the house two weeks later. And, yes, I inherited the “renter”s too. I worked out a mutually-beneficial plan that made both parties happy. That is the short and sweet version of the story. That was, by far, the hardest part and could have gone way worse than it did.

A simple way to approach selling

One of the things that Sally appreciated most about working with me was the simplified process of working through the guide I created called “Selling an Inherited House”. She liked that it gave her an idea of what to expect and what to work on. Happily, Sally had already handled some of the items. Most importantly, she had an escrow company handle the title transfer. And selling the property to me handled the rest of the items from the guide.

It was definitely a win-win situation, especially when Sally called me the day that escrow closed. All she wanted to say was, “We did it!” I don’t think either of us realized the burden that this house had been on her. It was a truly happy ending.

“I knew that she was the buyer I was willing to work with on the sale of our home.”

“From the first time I spoke with Jennifer, I knew that she was the buyer I was willing to work with on the sale of our home. Even though we ran into a few minor issues during the process, she was very patient and ready to help in any way she could to make the transition as smooth as possible. Very professional!! Thanks again.”