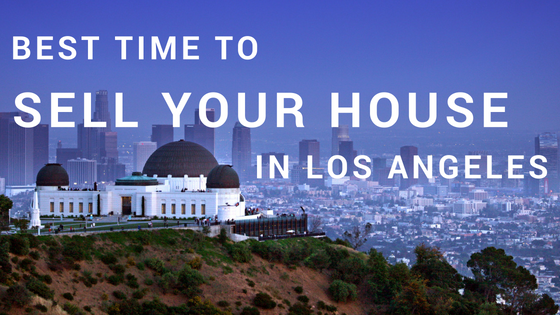 Los Angeles is truly a remarkable city. Between the melting pot of a culture, the perfect shoreline, and the never-ending list of things to do, it’s no surprise that so many people want to live there. In fact, Los Angeles just hit the 4 million people mark last year after gaining over 40,000 people since 2016. We can’t blame people for wanting to move here, but we can acknowledge the fact that with more and more people coming in, the cost of housing is on the upswing. The median home price in LA is around $570,500, which is expensive. While this may be bad news for many, it’s great news for those who want to sell their homes. Here we can show you the best time to sell your house in Los Angeles.

The best time to sell your house in Los Angeles

What is your priority?

Depending on your situation and the urgency of your move, you may prioritize selling quicker overselling for more or vice versa. Each has their own benefits and, oftentimes, they intersect. When homes stay on the market longer, they tend to lose value, which can then affect how much longer the home stays on the market. However, in some cities, the months when homes sell quickly are different from the months when homes sell for more money. Los Angeles, in a way, is one of these cities.

When to sell for more

If you want to sell your home for more money, the data suggests that the best time to sell in Los Angeles is the month of June. In this month, Los Angeles houses sell for around 12.10% more than the yearly average. Because homes generally take around three months to sell after having listed the house, plan to list in April. The worst month? January, when homes go for around 16.54% less than the yearly average. Given the fact that homes in the area are so expensive, even one percent can be a lot of money. Plan wisely.

When to sell more quickly

Like we’ve mentioned, selling quickly helps avoid the problems that can accompany a stale listing. If selling quickly is your priority, then plan to sell in August when homes are on the market for about 34 days less than the average. That’s over an entire month! Plan to list in June since homes take around three months to actually sell. We also suggest that you avoid December when homes tend to stay on the market for 11 days more than the yearly average.

First, look into tips for selling your home including which renovations to make, how to stage your home, and how to understand the market you’re selling in. Another tip for selling your house both quickly and at a great price is to look into a cash buyer like Jennifer Buys Houses. We’re a great solution for anyone who wants to simplify the selling process. If approved, we can close on your home in as little as seven days, giving you cash for the sale of your house. Learn more today!

“My house needed major repairs and I did not want to put the time and money into it, so I decided to sell quickly.  I contacted a few other companies, but they either low balled me or were too flaky.  Jennifer got back to me right away and answered all my questions.  When she explained how easy the process was, I thought it was too good to be true and there must be a catch. No catch, just simple and straightforward.

Her customer service skills are top notch.  She always responds to emails and phone calls quickly, and she updated me more than the escrow company did.  She is a good listener and is very understanding and flexible about scheduling needs.  Because of my schedule, I regret I did not get to meet her in person.  She is super nice, caring and fair, qualities you would not expect in a cutthroat business such as flipping houses, but these qualities will guarantee her much success.”